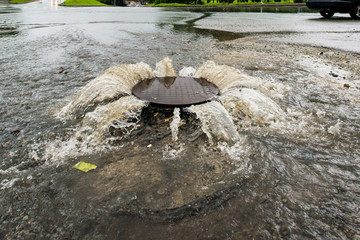 Many public sewer systems serve hundreds of thousands of homes, businesses, and institutions and typically have thousands of miles of sewer pipe.  The majority of our sewer systems in the US are gravity fed, however lift and pump stations are common in parts of most large systems.  While there are many new systems, the typical systems range from about 25 years old to more than 100 years old.  In some cases, the sanitary sewer and the surface water sewers may feed common mains.

Dealing with a Sewer Backup:

Turn off all sources of possible inflow to the system and call your wastewater district; (municipality in most cases).  They can come out and give advice as to what the problem might be and help determine if it’s the property owner’s responsibility or the district’s.  They may also have maps showing the location of the sewer line on your property.

How Can a Backup be the Property Owner’s Responsibility?

Though each district is different, typically the home or property owner is responsible for the portion of the system that is inside their property line.  This portion is referred to as the sewer lateral, or service lateral.  The sewer lateral is owned (and thus presumed to be maintained) by the property owner including any part which may extend into the street or public right of way.  In some districts, the responsibility continues up to the actual connection to the main.  Some developments and apartment complexes incorporate a private sewer system that discharges into a main.  These private systems often have no specific maintenance program, but they do often have an association that has charge of the system.  Most districts have a page on their website that details who is responsible for what portion and where the responsibility changes.

More often than not, the cause of a backup in a sewer lateral is from items that the line is not meant to handle, such as toys, clothing, towels, diapers, and many other items.  Often small children are linked to the introduction of these items.  Also, remember that what you flush down the toilet may not affect you, but it might cause problems for your neighbors!  Grease and roots are also main causes of sewer lateral backups.

Condition Assessment to Determine Cause

In most states, some form of a Public Health and Environment, or Water Quality Department will exist which regulates the collection and treatment of wastewater or sewage.  Most, if not all, will also require operators to be certified.  The certification involves coursework and testing.  Many states use the text referenced below in item 1.  One or more of the items listed below may serve as a standard of care or a regulation for a specific system:

Realize that if a legislative or code enforcement body has not adopted a specific document as code or regulation, then following the recommendations of that document is voluntary.  The rules and regulations of the specific district, in my experience, have always been in existence and should be viewed as the primary document with which compliance should be expected.

In every case I have worked on, a written procedure for inspection and maintenance of the lines was in effect.  However, the procedures for inspection may allow from 1 to 5 years for a specific section to be inspected.  Even then, the level of inspection may vary greatly from one district to another and is often based on the size of the district.  The district typically develops rules and regulations which apply to their operation of the sanitary sewer system.  In other districts, their property/casualty insurer may enforce intervals at which the system is to be inspected and/or serviced.  Typically included in these rules is a requirement to flush all lines at some time period, often one or two times per year.  Several methods are in use to maintain flow in the sewer systems throughout the United States.  Fire hydrants (which are often required to be flushed two times a year) are often used to flush the sewer lines by introduction through the manhole openings.  The next manhole downstream is opened to provides for visual inspection of flow.  This is an acceptable and common method of inspection and ensuring proper flow and flushing in a small, gravity flow sanitary sewer system.  The Operation and Maintenance of Wastewater Collection Systems training program has a suggestion for inspection and flushing once every 1 to 5 years.

There are several other routine methods including jetting, balling, rodding and others that are more common in large districts.  It should be noted that the more aggressive mechanical maintenance procedures have a very real possibility of damaging the sewer lines and creating a potential for pipe collapse and back up.

Citing the Operation and Maintenance of Wastewater Collection Systems training program referenced above, in section 12.401 it states:

The shotgun approach of “going through a system at set intervals with one piece of equipment” is wasteful and unnecessary.  Unfortunately, it is a common practice.

Certain procedures and practices may be suitable for one portion of a system and not the other.  In some cases, the “shotgun” approach has been satisfactory for large portions of the system, but has not sufficiently cleaned some small portions, or has damaged portions with older pipe.

It should also be noted that the standard of care for the operation of different sized systems is acknowledged by the States and the referenced training program.  For larger systems, the training and regulatory requirements increase.  The size and funding of larger systems adds funds and personnel, allowing for a higher degree of amortization of equipment.  The Operation and Maintenance of Wastewater Collection Systems training program also recognizes this fact.  In section 12.410 it states:

Many large organizations have purchased expensive equipment such as closed-circuit television or high-velocity cleaners and discovered a short time later, much to their disappointment, that similar but better equipment became available.  Because of the large investment, they have little choice but to keep and use their original equipment over a period of years necessary to amortize their original investment.

It recognizes the fact of budget constraints and that, even for a large district, they may not always be able to have or use the best equipment.  It is unreasonable to contend that small districts have the means, or should be required to operate on the level of the larger water districts, especially when regulatory and code provisions do not require it.

Investigation of Subrogation Potential from a Backup

Based on research and the numerous cases I have investigated, the issues are hinged on one of three things in most cases.

Our research suggests, that in most States, the courts have ruled that a district is not an insurer of its system.  Thus, a district is not strictly liable for a backup.  However, subrogation based on negligence or nuisance often hinges on proof that the district had prior notice of a problem or defect in their system.  There are also rulings that support the contention that the district is bound to use reasonable diligence and care to ensure that their system does not clog or backup.

In any event, the controlling criteria for the inspection and maintenance will be the practices and procedures of the individual district.  On every case, that is the first thing I ask for, second are the drawings of the system, at least in the area of interest.  Third will be historical records for the area of interest, at least for the last five years.  I have found that in some cases, that attorneys have requested these documents from districts and advised that they were going to have an engineer look at them and the case literally went away.

Prevention of back ups into a specific structure are related to one of two sources of the backup; either from (1) other users or system deficiencies, or (2) due to actions of the sewer system owner. When the backups are related to the main system, the following actions will typically solve the back up problem:

However, although you may prevent backup into a structure, that might not prevent back-ups of the main through manhole covers.

If the back-ups are due to obstructions in an otherwise sufficiently sized lateral with pipe integrity, a change in the introduced solids will typically solve the back up problem.  Cooking oils and grease should be poured into a heat-resistant container and disposed of, after it cools off, in the garbage, not the drain.  Some people assume that washing grease down the drain with hot water is acceptable.  As the grease goes down the drain it cools and solidifies either in the drain, the sewer lateral, or in the main sewer.  Paper towels, “flushable wipes”, disposable and cloth diapers and feminine products cause a great deal of problems in the sewer laterals as well as in the sewer mains.  These products do not deteriorate quickly, as does bathroom tissue.  They become lodged in portions of the lateral/main, causing a sewer backup.  In some cases, poor workmanship at the lateral connections may provide places for hair and tissue to catch.  In these cases, the pipe can be carefully reamed from the interior to provided better passage of solids.

Shrub and tree roots will make their way into sewer line cracks and joints.  These roots can cause extensive damage.  They may start out small, getting into a small crack in the pipe; but as the tree or shrub continues to grow, so does the root.  After time, this causes your sewer line to break, which in turn allows debris to hang up in the line, thus causing a backup.  One way to prevent roots from entering your line is to replace the sewer lateral with new PVC pipe.  The other alternative is to be careful about planting greenery around your sewer line.  If you have continuing problems with tree roots in your lateral, you may have to have them cut periodically.  If you have a plumber clean roots out of your lateral, it is advisable to contact the district so that they can flush or bail the debris introduced into the main line.

There have been numerous cases related to new home purchase inspections, or companies targeting areas and scaring homeowners into paying for installation of new sewer laterals.  While there certainly are cases where a sewer lateral needs to be replaced, the common practice is when an inspection company either shows a tape from another property where damage is present, and does not record a tape from a video sewer inspection of the property of concern.  Other companies do not have the expertise to evaluate what they see during an inspection.  Recently, the City of Arvada, CO sent a letter to all plumbing and drain cleaning companies who advertise in their area.  The city was very concerned about all of the complaints they have received from homeowners regarding companies overcharging, misinforming, and even blatantly deceiving their citizens.  It was a warning letter, and the complaints subsided as some companies left and went to other municipalities.

486 thoughts on “A Primer on Sewer Backups”